The AWP-1, officially Advanced Weapon Platform 1, is a boss that was added on the 21 of August in 2020 along with boss rush and the majority of the AWP Bosses.

AWP-1 has medium health and low speed, and a lot of minions. Each minion has high speed, health, and decent damage. There are 16 minions in total, and they respawn fast. The Smotherer turret of AWP-1 is also pretty strong, it has decent damage and penetration but mediocre bullet speed. Mega Swarmer turret is also strong, although it rarely locks on players. Its hives have a lot of health and bees deal very decent damage at a fast rate.

AWP-1 spawns by a randomizer, only in Boss Rush. 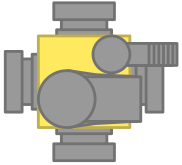 A high resolution image of AWP-1

AWP-1 targeted on someone
Community content is available under CC-BY-SA unless otherwise noted.
Advertisement