The AWP-33 is a very powerful TESTBED boss.

The AWP-33 has a square body with unique design with four squares on two sides branch into different things, it has two Single turrets on the squares. It has an Obliterator turret in front of the middle and has three back thrusters. It has two more other bodies which each have five Machine Gun barrels, a Railgun barrel, four Trapper turrets, three Nailgun turrets, two Single turrets, and finally two Smotherer turrets.

This boss has special arms branching off similar to Viixittyt Ilx but different.

Currently does not spawn. if it does. how your gonna defeat it? 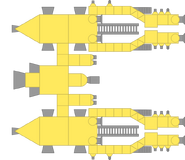