The AWP-69, officially Advanced Weapon Platform 69, is a boss that was added on the 21 of August in 2020 along with boss rush and the majority of the AWP Bosses.

AWP-69 has normal health and medium speed, and decent streamliner turret. Its bullets have high speed, along with medium penetration and damage. The main strength of AWP-69 is its minions, however. It instantly spawns two lime AWP-sin((4*pi)/45), which respawn immediately after dying.

AWP-69 spawns by a randomizer, and only in Boss Rush. It has been seen in other gamemodes (by me), but it is unknown if that is intended.

When fighting with AWP-69, it is advised to upgrade your movement speed and health since the minions that are spawned are pretty fast. Tanks with high reload and penetration are advised as AWP-69's streamliner turret can easily kill tanks with a low rate of fire. Dual Blaster with glass build can easily penetrate the boss and the minion auto-turrets and kill AWP-69. However, it has moderate penetration and some tanks can easily penetrate its bullets. Always move away from minions while circling around AWP-69, and do not try to kill minions. Focus only on the boss, and try not to hit or kill minions it spawns.

Bringing teammates with you is especially effective as AWP-69 will die even faster. Although AWP-69 will be only attacking one player, its minions will still attack the closest player. As such, even if AWP-69 is already distracted it is still advised to use the strategy above.

VPN sneaking is very hard due to the bots and non VPN players in boss rush, so it’s a bad idea to go VPN sneaking. 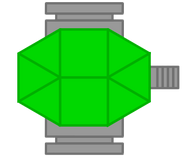 A high resolution image of AWP-69

AWP-69 and his minion (AWP-sin((4*pi)/45).
Community content is available under CC-BY-SA unless otherwise noted.
Advertisement