The AWP-Ice, officially Advanced Weapon Platform Ice, is a boss that was added on the 21 of August in 2020 along with boss rush and the majority of the AWP Bosses.

AWP-Ice has a cyan pentagon base, with a Builder turret in front. On the three back sides of the pentagon, AWP-Ice has three attached segments, each of triangular form and cyan. On top of each segment, AWP-Ice has an auto-turret.

AWP-Ice has low health, even lower than EK-1, and very fast speed, close to Comet. Its auto-turrets are pretty weak, they have low bullet speed, penetration, and damage. Blocks are the main ammunition of this boss, as the high speed and damage, capable of one-shotting many tanks. Blocks have decent penetration and health and combined with reload give this boss excellent firepower.

AWP-Ice spawns by a randomizer, and only in Boss Rush.

AWP-Ice can be pretty deadly against some tanks, because of its blocks and its high speed. Minion tanks do not even stand a chance to kill AWP-Ice, as the block will penetrate through the wall of minions, and kill you. Boss also moves with a high speed, and if needed can ram the enemy. Bullet spammers are not so effective because of the fact how high overall firepower of the boss is, but they can deal decent damage to the boss. Drones are very effective, as the boss has low health. Charging all your drones into the boss will likely bring it down to low health, where respawning drones can finish it off. Underseer branch can deal very effectively with this boss, as you can just one-shot it.

Pounder branch is also pretty effective because each of your bullets will do heavy damage to the boss. You will be able to kill the boss before it will kill you. Try to dodge the blocks by changing your direction erratically, and utilize the speed of the boss to hit it with your bullets. As another tank, without high starter damage or DPS, it is advised to stay away from AWP-Ice, as it can kill you in no time.

Redistributor may kill the AWP-Ice in one shot.

AWP-Ice locked on a Splitter 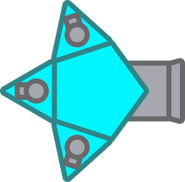 A high resolution image of AWP-Ice
Community content is available under CC-BY-SA unless otherwise noted.
Advertisement