The AWP-Ring, officially Advanced Weapon Platform Ring, is a boss that was added on the 21 of August in 2020 along with boss rush and the majority of the AWP Bosses.

AWP-Ring consists of ten equally-sized yellow pentagons attached to each other forming a ring. On each second pentagon, AWP-Ring has an auto-turret. On each other pentagon, AWP-ring has a swarm drone spawner inside the ring.

AWP-Ring has medium speed and health. The only hitbox of this boss is its invisible decagon base, which is surrounded by visible pentagons. Its auto-turrets are not very strong, but can still kill unaware players pretty fast. Its swarm drones have medium damage, speed, and low health but they are spawned at a pretty fast rate.

AWP-Ring spawns by a randomizer, and only in Boss Rush.

AWP-Ring spawns on one of the last waves of the boss rush, but it is not as powerful as the others. Its swarm drones can overwhelm slow tanks and tanks with a low rate of fire, but bullet spammers are nearly invulnerable to AWP-Ring. When fighting AWP-Ring, always shoot inside its ring, as it is the only place where its hitbox is located, despite being invisible. Make sure to upgrade some movement speed, as the boss moves pretty fast and can easily ram the slow tanks.

A very effective but risky method of killing AWP-Ring is using a tank from the Machine Gun branch and staying on its yellow pentagons while retreating and dealing damage to the boss. If done correctly, you will be able to deal high damage to the boss while eliminating swarm drones. Retreat if you have low health.

Killing AWP-Ring with teammates will make the job even quicker, as AWP-Ring can only lock on the single player. Even though the boss will be fighting you, your teammates can come help you finish off AWP-Ring even faster. 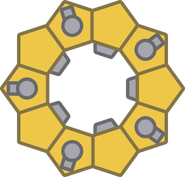 A high resolution image of AWP-Ring
Community content is available under CC-BY-SA unless otherwise noted.
Advertisement