AWP-cos(39°) has medium health and speed, and pretty decent penetration. Its inceptioner turrets do not help it much, since they usually do not hit players. Streamliner turrets and auto-turrets are pretty strong, have high penetration and speed. Although, some focused fire tanks can penetrate these turrets easily. Trap launchers help the boss to slightly propel itself forward, but not more.

AWP-cos(39°) spawns by a randomizer, and only in Boss Rush.

AWP-cos(39°) is by far not the strongest AWP boss but is pretty weak. Focused fire tanks like Twinceptionist or Splitter can easily penetrate the bullets of AWP-cos(39°), and it is advised to use such tanks. When fighting AWP-cos(39°), try to move in a straight line so that most turrets just cannot hit you. If you will be trying to dodge, bullets will gain spread and you will take damage. There is also a risky, but effective way of killing AWP-cos(39°) - getting close to its base with a tank like a Splitter. This way streamliner turrets will not be able to hit you, while you will deal massive damage.

If your teammates will come to help you kill AWP-cos(39°), it will die very fast. When attacking distracted AWP-cos(39°) it is advised to attack from sides, since traps have decent health and can somewhat protect the boss. 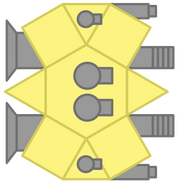 A high resolution image of AWP-cos(39°)
Community content is available under CC-BY-SA unless otherwise noted.
Advertisement