AWP-tan((3*pi)/10) has a medium speed and relatively low health. Its twin sniper turrets do not help the boss much, but they are still pretty strong, have high bullet penetration and damage. AWP-tan((3*pi)/10) also launches traps, but these are almost completely useless since they have low range and health. The main ammunition of AWP-tan((3*pi)/10) is its auto-turret bullets, as they have medium penetration, damage, and speed.

Another advantage of this method is that your teammates can attack the AWP-tan((3*pi)/10) while you are killing it. If AWP-tan((3*pi)/10) is already distracted by some player, it is best to attack it from the side. Traps have low health and medium penetration, so penetrating them will not be a problem. Attack the quadral segment, as it is the only place where you can land your hits and deal damage. 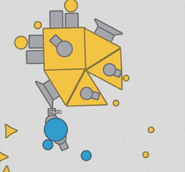 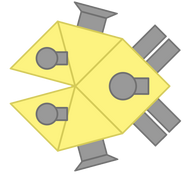 A high resolution image of AWP-tan((3*pi)/10)
Community content is available under CC-BY-SA unless otherwise noted.
Advertisement