The AZ Gun is a Tier 5 tank that upgrades from the AA Gun.

The AA Gun has a circular body with a wide rectangular barrel, with a red triangle on top of it (similar to the

Rainmaker), which rests on a trapezoidal base (similar to the

Assassin's base, but wider). It also has 2 small barrels arranged at an angle from the main barrel, also attached to the trapezoidal base.

The AZ Gun's main barrel shoots bullets that are similar to the Obliterator's bullets in terms of stats, however, as indicated by the red triangle, its front bullet accelerates as it travels, giving it increased speed and penetration. The side barrels shoot bullets similar to the Artillery's side bullets.

The AZ Gun is an upgrade from the

AA Gun at level 60, and cannot upgrade any further.

As the AZ Gun

Against the AZ Gun 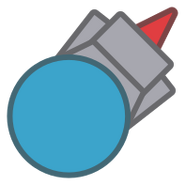 The AZ Gun with transparent background.
Community content is available under CC-BY-SA unless otherwise noted.
Advertisement