The Amnuhev is a Tier 5 Tank evolving from the Shrapnel at level 60. Amnuhev is a nuke tank and an "auto-tank"

The Amnuhev has a circular body with a cannon. The cannon has got a trapezoidal base and end. The center is rectangular.

The Amnuhev Nuke is an ellipse with small rectangles on the rear. It has an auto turret on the top.

The Amnuhev explosion is circular and surrounded by many auto-turrets.

The Amnuhev explosion has medium damage but the auto-turrets can be very dangerous. Unfortunately, when it touches a player, the nuke doesn't explode but deal a large amount of damage (half of opponent's life if correctly built)

The Amnuhev upgrade from Shrapnel at level 60.

Being a tier 5, the Amnuhev cannot evolve further. 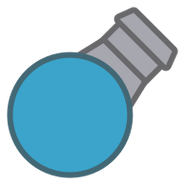 In game Amnuhev. You can also see the explosion on the left