Animator is a Tier 5 tank upgrading from the Spawner at level 60.

The Animator has Two Spawner cannons pointing at opposite corners. The space between them is the front of the tank.

The Animator spawns a small Machine Gun, Twin, Sniper, and Flank Guard tanks, serving as minions. They behave like their normal counterparts.

Spawner at level 60. It does not upgrade further. 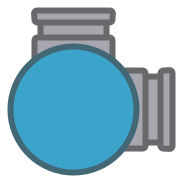 The Animator
Community content is available under CC-BY-SA unless otherwise noted.
Advertisement