In-game
The Annihilator is a Tier 4 Tank that upgrades from the Destroyer at level 45.

The Annihilator has a cannon that is as wide as the tank itself.

The bullets are as big as the tank itself.

The Annihilator fires even more powerful bullets that are bigger, deal more damage, and have more penetration and recoil at the cost of bullet speed and reload.

The Annihilator can upgrade from the

The Annihilator can upgrade into the 28 tanks shown below (incomplete list): 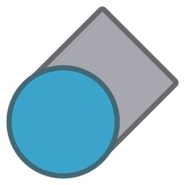