Applicus's design features a large, red circle base with eight Twin auto-turrets around it. A turret resembling a Disintegrator is mounted on top.

The Applicus has a disintegrator tower and causes decent damage and whoever the bullet hit get poison effect. The Applicus has eight automatic twin turrets that cause somewhat weak damage compared to the Orangicus and Lemonicus.

This boss is spawned via a randomizer.

Applicus's bullets can easily be avoided or blocked with the right tank. It does not have a lot of health, so it is pretty easy to defeat. Trappers are ideal for killing this boss, because the traps can block bullets and when Applicus is heading towards you, the traps will deal damage to him. 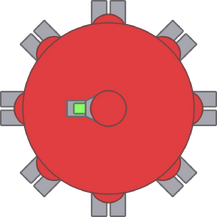 Applicus with half health in Boss Rush