The Arachnid is a Tier 3 tank that upgrades from the Flank Guard and the Minishot at level 30.

The Arachnid has a circular body with three medium-size guns, spread equally around its body, and six smaller guns in pairs, also spread around its body.

The primary guns of the Arachnid are similar to the Flank Guard's, firing average-power bullets at a medium rate. Its smaller guns have a slightly faster reload and fire smaller, quicker, and weaker bullets.

The Arachnid upgrades from the

Flank Guard and the

The Arachnid can upgrade to the following:

The Arachnid was officially added to the game on January 28, 2019 alongside many of the Arachnid's upgrades. 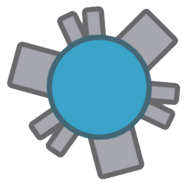 A high-res picture of the Arachnid.
日本語
Community content is available under CC-BY-SA unless otherwise noted.
Advertisement