The Arrow is an in-game Tier-5 tank.

The Arrow is basically a Rocket, but with the front barrel replaced by 2 pelleter barrels.

The Arrow shoots pellets at the front. Unlike the other Tri-angle branch tanks, the barrels have less recoil, making the rear thrusters doing their job better, hence making it faster.

The Arrow upgrades form the Infuser and the Rocket at Level 60. It doesn't upgrade any further as it is a Tier-5 tank.

Most other rammers (at low health), tanks with BOTH low DPS and low projectile damage, drone users. 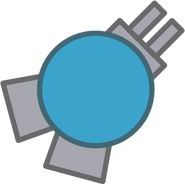 A high-resolution image of the Arrow.
Community content is available under CC-BY-SA unless otherwise noted.
Advertisement