Article 13 Decentralizer Bullet
Article 13 is a TESTBED boss that was added at an unknown release date.

Article 13 may be be able to fire around 4 of its decentralizer turrets at you, and these decentralizer bullets are dangerous and are capable of 1-shotting you. This boss may also be able to autospin.

The boss will not spawn unless its used by a beta tester or spawned in with the create entity command.

Even though its most likely not going to be encountered in your play through of the game its best to circle around it while shooting in order to trick its cannons into firing at you and missing. 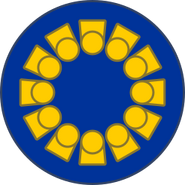 A high resolution image of Article 13
Community content is available under CC-BY-SA unless otherwise noted.
Advertisement