In-game
The Assassin is a Tier 3 Tank upgrading from the Sniper at level 30.

The Assassin features a circular base with a rectangular gun supported with a trapezoidal base. Compared to its predecessor, the Sniper, its gun is slightly longer.

x1.05
The Assassin has a larger field of vision than the Sniper and faster Bullet Speed; however, it has a reduced rate of fire. Its bullets are of the same power, besides a very small increase in resistance.

The Assassin upgrades from the

The Assassin can upgrade to the following: 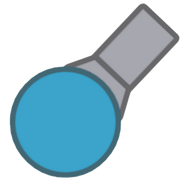 A high-res picture of the Assassin.
日本語
Community content is available under CC-BY-SA unless otherwise noted.
Advertisement