The Assassinception is an in-game Tier 5 tank.

Assassinception is the Assassin tank but with a smaller version of itself as an auto-turret.

The tank is the Assassin tank with an auto-turret that has nerfed stats from the Assassin. The Auto Turret's FOV is narrower than yours. It's rare case. But the auto-turret's bullet is stronger than usual.

The tank upgrades from

Snipeception. It does not upgrade any further. 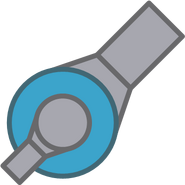 The high-res image of the Assassinception.
Community content is available under CC-BY-SA unless otherwise noted.
Advertisement