The Assessor is a Tier 4 tank that upgrades from the Navigator and Assassin at level 45.

The Assessor has a circular body with a segmented, triangular blade in front and a small tapering barrel at the rear.

Like the Navigator and any other Lancer, the Assessor has a lance that deals heavy damage at close range. This can also be used to block enemy bullets and other projectiles.

The Assessor has an even larger FoV than Navigator, about the same size as the Assassin.

The Assessor upgrades from the

The Assessor can upgrade to the following: 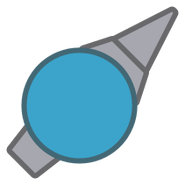 A high-res picture of the Assessor.
Community content is available under CC-BY-SA unless otherwise noted.
Advertisement