The Assult is a Tier 3 tank that upgrades from the Machine Gun at level 30.

The Assult has a circular body with a trapezoidal gun in front. It is slightly thinner and longer than the Machine Gun's (like the Gatling's.

Unlike the Machine Gun, the Assult's gun fires slowly, but with spread. The special ability of the Assult and its upgrades is its ability to become near-transparent. The Assult must not be moving or firing and only takes a few seconds to become invisible.

The Assult upgrades from the

The Assult can upgrade to the following: 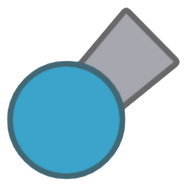 A high-res picture of the Assult.