Ingame
The Atlatl is tier 5 tank which can upgrade from Spreadbow.

The Atlatl is a tank that has low health and 4 Swarm Drone Bullets and a Spreadling design in the front,back has the same thing, but not the Spreadling barrels.

The tank can upgrade from

Spreadbow at level 60, and doesn't upgrade any further.

As the Atlatl, you must be aware of Annihilator and Destroyer, as it can one-shot you but not when you know how to dodge, Be very aware of Bullet Speed, as you probably cant dodge so add 2 or less, or 3 movement speed. You can dodge Annihilator bullets now. Now you are ready to battle tanks with the tank that almost nobody knows how to get. 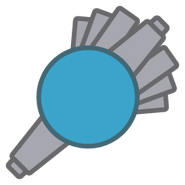 The transparent image of Atlatl
Community content is available under CC-BY-SA unless otherwise noted.
Advertisement