Ingame
The Attack Missiler is a tier 5 tank that upgrades from the Sidewinder at level 60.

The Attack Missiler is a circular tank with a longer and slightly wider main barrel as well as a longer barrel underneath. The rocket looks like a reversed Machine Penta.

Sidewinder at level 60. Since this tank is Tier 5, it doesn't upgrade any further. 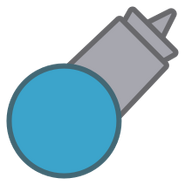 A transparent image of an Attack Missiler.