Auto-2 Auto Turret Bullet (x2)
The Auto-2 is a Tier 2 Tank that upgrades from the Basic at level 15.The main focus of its branch is Two or more controllable auto-turrets in the game.

x1.25
The Auto-2 does not turn and follow the cursor. Instead, it auto-spins at a slow pace. While passive, the turrets will automatically shoot at the most dangerous thing in their sight. The player can manually aim these turrets using the primary and secondary fire buttons. The turrets themselves have average firepower and shoot slightly smaller than average bullets. Keep in mind the smaller bullets have similar stats to those of a Basic's. These bullets are also speedy and deal a good amount of damage. The Auto-2's turrets each have an arc of 180 degrees.

The Auto-2 upgrades from the

The Auto-2 can upgrade to the following: 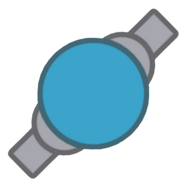 A high-res picture of the Auto-2.

The Switcheroo in its Auto-2 form. 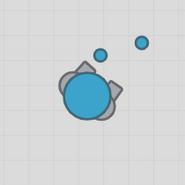 The Auto-2 firing bullets at a target.

Auto-2 is seen in this glitched upgrade screen
Community content is available under CC-BY-SA unless otherwise noted.
Advertisement