Auto-3 Bullet
The Auto-3 is a Tier 3 Tank upgrading from the Auto-2 and the Flank Guard at level 30.

The Auto-3 has a circular body with three turrets spread around its body. Each turret has a small gun attached to it.

Like the Auto-2, the Auto-3 is an autospin tank that uses its turrets to fire. The player can manually aim and fire its turrets using the firing buttons. While not being controlled, they will passively fire at objects in their sight.

Each turret of the Auto-3 deals moderate damage with their small, fast bullets.

The Auto-3 upgrades from the

The Auto-3 can upgrade to the following: 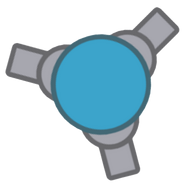 A high-res picture of the Auto-3.
Community content is available under CC-BY-SA unless otherwise noted.
Advertisement