The Auto-Auto-2 is a Tier 3 tank that upgrades from the Auto-2 and the Auto-Basic at level 30.

The Auto-Auto-2 has a circular body with two turrets on opposite sides of its body. Each turret has a single, average-size gun. It also has an auto-turret on top of its body with a Basic barrel.

Like the Auto-2, the Auto-Auto-2 is an autospin tank that uses its two turrets to fire. While not being controlled, they will passively fire at enemies in their sight. The player can manually aim and fire its turrets using the firing buttons. The Auto-2's turrets fire slightly smaller bullets that are fast and deal a good amount of damage. Each of its turrets has an arc slightly more than 180 degrees. Its auto-turret fires fast bullets that deal moderate damage at a fast pace, similar to other auto-turrets.

The Auto-Auto-2 upgrades from the

The Auto-Auto-2 can upgrade to the following: 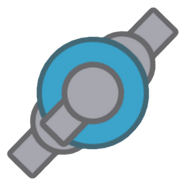 A high-res picture of the Auto-Auto-2.
日本語
Community content is available under CC-BY-SA unless otherwise noted.
Advertisement