The Auto-Pelleter is a Tier 3 tank that upgrades from the Pelleter and the Auto-Basic at level 30.

The Auto-Pelleter has a circular body with two Pelleter guns in front with a short base. It has an auto-turret on top of its body with a single barrel.

Like the Pelleter, the Auto-Pelleter fires small, speedy bullets at a fast rate. Its bullets are fast but also relatively weak.

Its auto-turret fires fast bullets that deal moderate damage at a fast pace, similar to other auto-turrets.

The Auto-Pelleter upgrades from the

The Auto-Pelleter can upgrade to the following: 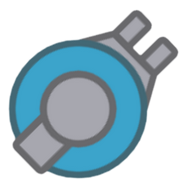 A high-res picture of the Auto-Pelleter.
日本語
Community content is available under CC-BY-SA unless otherwise noted.
Advertisement