The Axolotl is a Tier 4 tank that upgrades from the Boxer, Twin Flank, and the Spreadling at level 45.

The Axolotl has a circular body with a pair of guns in front. On its back, it has a single primary gun with six smaller guns beside it, three on each side.

The Axolotl's front guns are similar to the Twin's, firing bullets at an increased rate.

Meanwhile, the back guns of the Axolotl are similar to the Spreadling, firing a lot of bullets in a wide angle. Its smaller secondary bullets deal less damage than its primary bullets.

The Axolotl upgrades from the

The Axolotl can upgrade to the following:

The Axolotl was suggested by Clarise and was added to the game on February 12, 2019. 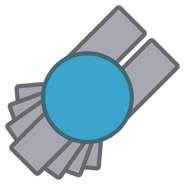 The Axolotl
Community content is available under CC-BY-SA unless otherwise noted.
Advertisement