The Back Shield is a Tier 3 tank that upgrades from the Flank Guard at level 30.

The Back Shield has a circular body with an average-sized gun in front. On its back is an orange, arrow-shaped shield.

The Back Shield's main feature is its shield, which completely obstructs and deflects any single thing from moving into it. It acts similarly to map obstacles, reflecting anything that hits it without suffering any damage. Its main gun has similar firepower to the Basic's gun, firing with average power and speed.

The Back Shield upgrades from the

The Back Shield can upgrade to the following:

As the Back Shield

Against the Back Shield

The Back Shield was officially added to the game on November 10, 2019, alongside the Hidden Gunner. 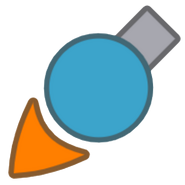 A high-res picture of the Back Shield.
日本語
Community content is available under CC-BY-SA unless otherwise noted.
Advertisement