The Balisong is a Tier 5 Tank that upgrades from the Trailblazer and Guillotine at Level 60.

The Balisong has a Circular Body, One lance with a blue rectangle in it, has 2 Back cannons if on Trailblazer Phase, 2 Front Cannons, and Rectangle color changes to Red if on Guillotine Phase.

The Balisong has a Lance with blue rectangle in it, Signifying the Balisong's changing phases.

The Guillotine Phase deals Massive Damage with Lances, It can be used to Kill Bosses like EK-X, and the Blue Rectangle changes to Red.

The Trailblazer Phase has Back cannons that deals Low Damage in exchange for Recoil.

The Balisong Upgrades from the

Guillotine at Level 60, It does not Upgrade any Further. 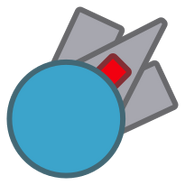 Balisong at its Guillotine Phase. 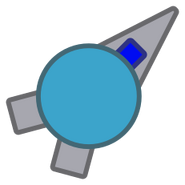 Balisong at its Trailblazer Phase.

A GIF of the balisong.
Community content is available under CC-BY-SA unless otherwise noted.
Advertisement