The Bateau is a Tier 3 Tank that upgrades from Propeller at level 30. It is noticeably differenct from the Propeller.

The Bateau has a circular body and a single moderately-sized gun in front. A Machine Gun (trapezoidal) barrel on the back has more recoil and less damage.

Like the Propeller, the Bateau's front gun fires bullets similar to the Basic in firepower, reload, and size. Instead of having two small guns, the Bateau has one thruster gun that fires at a very fast pace, allowing the Bateau to move at a faster pace than most other tanks.

The Bateau upgrades from the

The Bateau can upgrade to the following:

The Bateau was suggested by Fillygroove and added to the game on December 28, 2018. 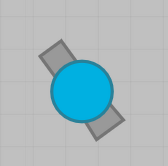 The Bateau in-game in the Classic Diep color scheme. 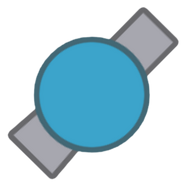 A high-res picture of the Bateau.
日本語
Community content is available under CC-BY-SA unless otherwise noted.
Advertisement