The Battlegon is a boss that is on the TESTBED Bosses Branch due to how possibly Overpowered it's stats could be, this boss was added on an unknown date and will most likely remain unknown because the date it was added wasn't even listed in the changelog.

Battlegon has a gray octagon with Destroyer and Pounder barrels scattered on each side. It also has a Machine Gun turret in the center of it's octagon base.

Battlegon has 4 pounder cannons along with 4 destroyer cannons stats of these weapons have the same stats of destroyer or pounder. also has a single machine gun placed in the center.

A strategy will be made after stats have been revealed for this boss. 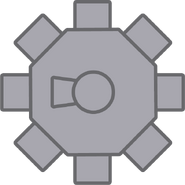 A high res picture of Battlegon
Community content is available under CC-BY-SA unless otherwise noted.
Advertisement