The Battleship is a Tier 4 tank that upgrades from the

The Battleship has a circular body with four swarm drone guns in total, two on each side of its body.

Cruiser, the Battleship wields time-limited swarm drones. These swarm drones must be actively fired and are also much faster, smaller, and weaker than regular drones.

The Battleship upgrades from the

The Battleship can upgrade to the following: 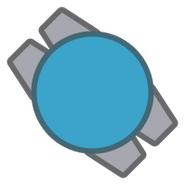 A transparent image of a Battleship.
Community content is available under CC-BY-SA unless otherwise noted.
Advertisement