Blitzkrieg, originally Dreadnought, is a boss that was added with the release of the game.

Blitzkrieg has a black triangle base with an automatic Triplet turret on top. A trap launcher is located at the front. On two sides of base two twin turrets are attached by a rectangular section.

Blitzkrieg's main bullets cross each other at close range, thus giving the boss excellent protection since bullets have high health and penetration. Its Triplet turret is powerful, as its bullets have powerful statistics. Its traps add up some firepower to the boss, making triplet bullets even harder to penetrate.

Boss has a mediocre range and moves with average speed.

Blitzkrieg has an incredible offensive and defensive capabilities: its crossing bullets give it excellent defense and offense at the close-to-middle range, so you will unlikely be able to deal damage to Blitzkrieg at this range. It also launches powerful traps and somewhat slow but still strong auto bullets.

Considering all of the above, and also the fact this boss has lower FoV than other bosses, you can defeat it at long range. Oscilloscope branch can deal with this boss very effectively, but in order to this to work, there has to be a rock between you and the boss. Most numbers of rocks are in the center and corners. This boss is an influx boss: it will usually spawn near edges. Luring it into the corner is the best choice, but be careful to not come to close. Try to stay at a minimal possible distance. After this is done, only triplet auto turret will remain. Bullet speed, penetration, and your movement speed are most important.

Blitzkrieg locked on someone

Blitzkrieg attacked by a splitter

A blitzkrieg spotted in ffa. 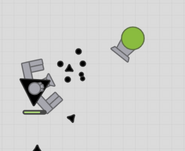 Blitzkrieg locked on a cosmonaut