The Bohrer is a Tier 5 Tank that upgrades from the Auto-Borer and Revolutionist at level 60.

In the changelogs, nothing is written about the Bohrer creation, his history is pretty deep. Maybe it was so old that to make space, we had to delete ancient messages. The most ancient trace of it is the 12/17/2019 (December 17th), where it could evolve from the Borer and Revolutionist. On 03/18/2020 (March 18th), the Bohrer could also evolve from Auto-Borer. On 03/29/2020 (March 29th) It couldn't evolve from the Borer anymore but only from the Auto-Borer. It was then considered as a "bug".

The Bohrer has a circular body, with a wide black circle around where is attached two auto-turrets. It also has a Borer cannon with a trapezoidal base and two (very) long rectangles.

The Bohrer has a medium speed and a ridiculous bullet damage. The Borer cannon has a better penetration than the auto-turrets. Even being very low, the builds have a huge influence on the bullet damage, being pretty good with a max bullet damage. With a good build (ideas on the bottom), the Bohrer can be a good tank.

The Bohrer upgrade from

As a Tier 5 tank, the Bohrer cannot evolve further. 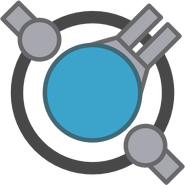 The Bohrer
Community content is available under CC-BY-SA unless otherwise noted.
Advertisement