Bow is a special boss that was added with the release of the game. On its death, it splits into 1 Bow Core and two Bow Shards. After Bow Core and Bow Shards are killed, the boss is considered defeated and new bosses can spawn.

The Bow has a yellow square base with a Wrecking Ball turret on top. The base is slightly tilted. The base has two attached pink spawner bases. Each spawner base looks like a pink square with a hole in the center. On the side of each spawner base, two necro-drone spawners are located. Some part of spawner bases is hidden behind the Bow base.

Wrecking Ball turret releases fast, powerful and damaging bullets that can kill unaware players pretty fast. The bullets cannot penetrate drones or minions fast and can be penetrated by tanks like quintuplets.

Drones are not that much of a threat, a Bow can have a maximum of four drones at once. They are replenished fairly quickly, although they do not pose an enormous threat.

Spawns by a randomizer, or when the Bowed Sanctuary Dies

Because of its high number of projectiles, you will be outflanked if you are not using high spread tanks or taking cover. If you are a focused tank, like Streamliner, you do not have many chances against the Bow. Most drone tanks are also ineffective: Bow fires low damage projectiles which come in numbers. While you will be leading your drones, you will take a lot of damage and maybe even die.

If you are, however, a high-spread tank, you stand decent chances to defeat the Bow. If you are a Hexa-tank branch, try to come slightly closer to a Bow, while being close to indestructible rocks. If you are a machine gun branch, try to fight at a medium distance: you can penetrate the wrecking ball bullets. Just do not forget to move around erratically in order to avoid them. The Bow has a lot of health, so please note that this method may take some time, and other players may come.

If you are a minion tank, take note that the Bow will outgun you in open fields. Instead, take cover behind rocks, and slowly lead some minions around the Bow. It also will take some time, but far faster than the above method. When you kill a Bow, immediately move away. Three minibosses will spawn, and they can outflank you.

The Bow Core has a yellow square base with a Wrecking Ball turret on top. On each side of the Bow Core are located sidewinder deployers, only wider.

Wrecking Ball turret releases fast, powerful and damaging bullets that can kill unaware players pretty fast. The bullets cannot penetrate drones or minions fast and can be penetrated by tanks like quintuplets. These bullets, however, are easier to penetrate thanks to the absence of drones.

Sidewinder bullets ( or snakes ) are spawned at a pretty low speed and have low speed by themselves. Dodging will not be a problem.

Spawns when a Bow dies.

The Bow Core moves relatively slowly, far slower than the Bow itself. It will come with two Bow Shards and is not so strong by itself. So it is advised to get rid of Bow Shards first, and then attack the Bow Core.

Any tank with at least some penetration and constant bullet speed can easily defeat the Bow Core. Still, the player should be varied of:

The Bow Shard has a pink rounded square base with a hole in the center. It is tilted by 45 degrees. On the two sides in the back, two necro-drone spawners are located. In the front, it has its unique turret, which is similar to Infantryman turret.

Drones are spawned at the same rate as the Bow's drones, and it can have a maximum of two. The Bow Shards are basically just Infantrymen with stronger bullets. The drones are not even as strong as a Director's.

It's the main turret deals powerful bullets that can kill a defenseless player in a matter of seconds, although almost all tanks have bullets with higher penetration.

Spawns when a Bow dies.

The Bow Core moves relatively fast, and its main turret can shred a player without defense. So, always keep your drones or minions close if you are a minion/drone tank. If you are a bullet spammer tank, do not stop firing. Bullets deal with a surprisingly high amount of damage.

Try to lure it away from Bow Core due to its speed, so you can kill it easier. After it is alone, you can just outgun its main turret. All drones which will outflank do not deal enough damage to represent a serious threat. 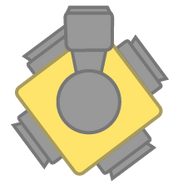 Bow Shard attacked by a Splitter

Bow Idling in the game

A high resolution image of Bow
Community content is available under CC-BY-SA unless otherwise noted.
Advertisement