The Bruiser is a Tier 3 Tank that upgrades from the Pounder and the Single at level 30. It is basically a Pounder that can zoom. (Single + Pounder).

The Bruiser has a circular base and a large barrel like the Pounder. Its gun has a big, slanted base supporting it.

The Bruiser's gun is very similar to the Pounder's, firing large, powerful bullets at a slower rate of fire. Its bullets deal a lot of damage and also cause a lot of recoil.

Like the Single, the Bruiser has the ability to extend its camera in the direction it's facing by holding secondary fire. The camera will stay in that position until secondary fire is released.

The Bruiser upgrades from the

The Bruiser can upgrade to the following:

The Bruiser was conceptualized by Hellcat and added to the game on February 5, 2019. 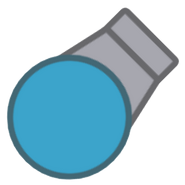 A high-res picture of the Bruiser.
日本語
Community content is available under CC-BY-SA unless otherwise noted.
Advertisement