The Carbonfras is a boss that was added on November 3, 2019/2020. Currently, it is on the TESTBED bosses branch.

Carbonfras has a high firepower, mainly due to its railguns, and can easily kill most normal tanks very fast. Its bullets have decent spread and high damage, so you will not stand a chance by yourself against Carbonfras. Although the boss is strong, there are still ways of defeating it.

One way is by using Redistributor and utilizing the large size of the boss. Your bullets will deal quite a lot of damage, and you can keep a safe distance. Most of the time you should hide behind an obstacle, then slightly move away from it, should Carbonfras and repeat. You will likely hit the boss due to its large size, so repeat the procedure until the boss is dead. Using Incognito is also a very effective way to kill this boss.

If you are in a team with another player, you can out-gun the Carbonfras. Firstly, you should both choose tanks with very high penetration and rate of fire. Secondly, you must attack from a single flank, so make sure you can trust your teammate. You will be able to penetrate most of Carbonfras's bullets, while some of your bullets will hit the boss due to its large size. 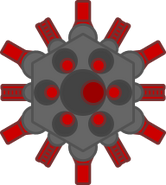 A high resolution image of Carbonfras

Carbonfras locked on someone
Community content is available under CC-BY-SA unless otherwise noted.
Advertisement