The Ceptionist is a Tier 3 tank that branches from the Inceptioner at level 30.

The Ceptionist shoots bullets that resemble miniature Basic tanks as bullets. These Ceptionist bullets fire automatically while moving, their bullets dealing a small amount of damage.

The Ceptionist upgrades from the

The Ceptionist can upgrade to the following: 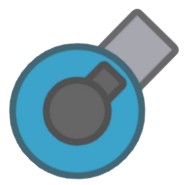 A high-res picture of the Ceptionist.