Collider has a medium speed and health and can spawn up to ten drones of each type. Collider's crushers do not split upon death, are smaller, and have the same stats as Crusher Fragments. Its machine gun turrets are strong, have a high rate of fire, penetration, and spread.

Collider has a pretty high firepower, which most tanks will not be able to penetrate. Some tanks with a very high rate of fire and penetration will still not be able to penetrate bullets. Tanks with a low danger value like Twinceptionist or Twin Machine will be able to easily take out Collider. Such a tank should wait until the boss will be distracted while dealing low damage to it. After it locks on another player, you can easily deal massive damage to it. Incognito and VPN can also work if the boss is already distracted. Splitter can kill this boss in solo, but it will require the player to guide his minions around the bullets.

Tanks like Obliterator or Redistributor will also be able to kill the boss, but only if it is distracted. The player should keep a long range, then come closer and shoot Collider. If the boss locks on you, immediately retreat and wait until it will lock on another player. This may take some time, but it will also work.

Collider locked on invariant in a maze

Collider dying to a decanter while attacking a litterer bot 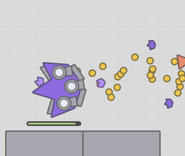 Collider locked on someone in a maze 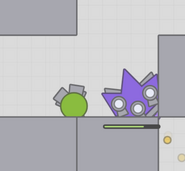 Collider and a shooting star in a maze
Community content is available under CC-BY-SA unless otherwise noted.
Advertisement