The Colonist is a Tier 4 tank upgrading from the Mini Swarmer at level 45.

The Colonist looks like the Mini Swarmer but with a slightly shorter barrel. It has a short, wide barrel on top around the width of a Pounder's barrel, and a wider, tapering barrel below.

The Colonist shoots spinning swarming bullets with barrels on each end, for a total of two barrels. Its bullets are relatively strong but have a longer reload time.

Each barrel shoots swarm drones, which chase nearby enemies and have low health. The swarmers themselves deal moderate damage on impact.

The Colonist upgrades from the

The Colonist can upgrade to the following: 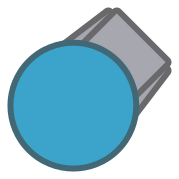 A high-res picture of the Colonist.

The Colonist was designed by Astra and was added to the game on November 23, 2018.