The Crowbar is a Tier 5 tank that upgrades from the

Flank Sniper and the

The Crowbar has a circular body and a long Sniper gun in front. On its back are two turrets with a set of three guns on each one.

The Crowbar's main gun deals similar damage to the Sniper but has a slightly slower rate of fire. Its bullets are fast and powerful.

Each of its turrets has three guns and fires like the Triplet. However, these turrets have much less reload and power. Their bullets are also very small.

The Crowbar's turrets are uncontrollable and have a wide arc just slightly less than 180 degrees, turning to aim at any target within their arc.

The Crowbar upgrades from the

Flank Sniper and the

The Crowbar does not upgrade to any tank.

The Crowbar was added as a Beta Tank at an unknown time and added to the game on March 29, 2019. It was then accidentally removed then readded. 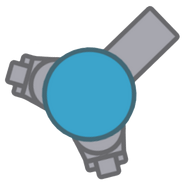 A high-res picture of the Crowbar.
Community content is available under CC-BY-SA unless otherwise noted.
Advertisement