The Decentralizer is a tier 5 tank that upgrades from the Annihilator and the Mega Grower at level 60.

The Decentralizer has a wide trapezoid barrel that is slightly wider than the tank's body. Its bullets are the same size as the tank body.

The Decentralizer has similar stats as the Annihilator, with only slightly less bullet speed, and more bullet damage, health, and penetration, and slower reload. Upon right clicking, the bullets shot out would begin to expand until the player stops right clicking.

The Decentralizer upgrades from the Annihilator and the Mega Grower. It does not upgrade any further. 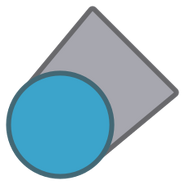 A high resolution image of a Decentralizer
Community content is available under CC-BY-SA unless otherwise noted.
Advertisement