The Deltrablade is a Nest Defender boss that was on December 15, 2018.

Deltablade has an orange concave-convex dodecahedron shape, similar to Tri-Blade. On each side of the "blade", it has an auto missle deployer(It looks like a Shrapnel), each has a white circle inside the auto-turrets base. Between the "blades", Deltrablade has a Trapper launcher.

Deltrablade has medium speed, always spins, and fires traps no matter what. Deltrablade traps do not have much health or penetration, but they have decent speed and damage, capable of killing unaware players fast. Deltrablade's main strengths are its missiles: they are strong, have great speed and penetration, and launch bullets that have decent damage. Missiles are spawned at a fast rate, but those missles are small and also very fast making them have high penetration.

Since Deltrablade has excellent DPS and RoF, most tanks just cannot beat it. Bullet spammers will just not be able to penetrate its missiles and the Machine Gun bullets that escape the missiles will most likely be penetrated by Deltrablade's traps, which are respawned fast. Drone tanks are completely useless against the boss as most of the drones will bump into traps and missiles, and you will also take damage. You will just not be able to kill Deltrablade before it kills you with majority of tanks.

Still, some tanks may counter Deltrablade effectively. Firstly, Splitter can kill a Deltrablade. In order to do so, the splitter will have to take advantage of its incredibly high minion respawn rate and DPS. Getting to medium range with this boss, and then charge all your minions in the Deltrablade. After this, retreat, come from another flank and repeat the procedure. Surprisingly, a skilled Launcher branch can counter Deltrablade with the correct build. Firstly, you will need Shield regeneration, as well as high movement speed, some penetration. You will need to launch missiles to the sides of Deltablade, come to the side where the missile was launched, and force Deltrablade to take damage from it.

Fighting Deltrablade in groups is much easier. If there will be at least a single player distracting the Deltrablade, the other player can no longer worry about missiles. Any tank will work as a distraction for the boss, as the tank can keep firing and minimizing damage from Deltrablade. Meanwhile, another tank can deal heavy damage to the boss. 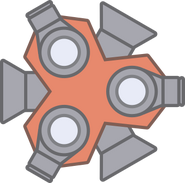 The transparent image of the Deltrablade.

A Hexa Blaster chasing a Deltrablade.

A Deltrablade and a Magnetar "teaming" on a Hexa Blaster.
Community content is available under CC-BY-SA unless otherwise noted.
Advertisement