Demolisher is an influx boss that was added on December 25, 2018.

Demolisher has a green hexagon base, with a smasher base below it. On each side of hexagon resides either Gunner Dominator turret or a huge minion spawner, similar to the Reaper's one, spanning almost all sides of the hexagon. Minion spawner overlaps with the base. On the ends of each other side of the hexagon are located two trap spawners, slightly wider than normal.

Demolisher's Triple turrets are automatic: they can be focused either on one or multiple players. Their damage is high; they can eliminate half of the player's health fast. Traps do high damage, but still not that high enough to one-shot a glass-build tank. Traps and turrets combined, they give decent penetration, but still can be out-penetrated by streamliner branch.

Minions are very similar to the non-upgraded Splitter minions: low damage, good body-ram damage, fast speed. Their health is not very high, however, and they can be killed in a matter of seconds. They come in numbers and respawn almost instantly. They have a slightly lower range as Dropship's minions.

Demolisher itself moves very slowly but has much health, and regenerates at a pretty quick rate.

If you add up effects of constantly respawning minions, traps and at least a single triple turret, no fast-firing tank can out-penetrate firepower of a Demolisher. Slow-firing tanks like annihilators can penetrate the bullets and minions, but cannot deal constant damage before Demolisher will regenerate, thus making most tank useless against this boss.

If you are not a minion tank like a factory or splitter, you cannot eliminate Demolisher by yourself. So, the main option is to flee. Fleeing is not hard: the boss is moving slowly and its minions can be easily eliminated. Bullets and traps have a pretty limited range.

If you however are a minion based-tank, like a factory or ideally splitter, you can eliminate Demolisher in solo. Then it would be advantageous to relatively easily kill a 700K+ boss. 2 factory minions or 5 splitter minions can neglect the firepower minions and bullets. The problem is, it is hard to coordinate two groups of minions simultaneously. An easy way to do this is to pick a splitter glass build, then find an indestructible polygon ( gray ones ) and circle Demolisher around it. While leaving multiple minions to protect yourself, use all your other minions to ram into the Demolisher! Each time you should launch approximately 16 minions in the Demolisher so that they would collide and deal body damage. 4-6 such rounds should do it. 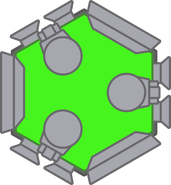 The demolisher locked on someone

Two Demolishers looked at me
Community content is available under CC-BY-SA unless otherwise noted.
Advertisement