Derogator has an orange hexadecagon base with a short and wide Extinctionist turret on top and an auto turret on each side of its base.

Derogator has medium speed and spins slowly. Its destroyer turret is pretty strong, it has high penetration but low bullet speed and reload. Its auto-turrets have high RoF combined, decent penetration and damage along with high bullet speed. However, even though Derogator has lots of auto turrets, only 3 can aim at single player at once.

Derogator has pretty mediocre firepower but still high damage. It moves at a slow speed, yet faster than most very slow tanks. If you have high RoF and penetration, fighting and killing this boss will not be a problem. Since bullets are fired at a fast rate, bullet spammers are the main and most effective counter to the boss.

A very effective way of defeating this tank alone is using the tank Binoculars with the upgrades: Max 7,6,5,4,3. This will easily penetrate the Derogator's auto bullets and damage the tank very fast because of the penetration and damage. Dodge it's destroyer bullets. 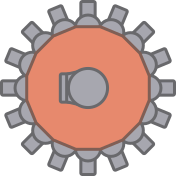 A high resolution image of Derogator 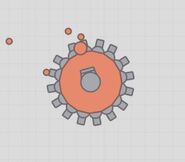