The Destroyer is a Tier 3 Tank that upgrades from the Pounder at level 30. It is the branch of even-more-powerful bullets and most "ambushing" tanks.

The Destroyer has a circular body and a very large and wide gun in front.

Focusing more on the characteristics of the Pounder, the Destroyer fires even more powerful bullets at a slower rate. Its bullets deal a lot more damage, have more health and penetration, and have a lot more recoil than the Pounder's bullets. They are also much larger in size as well. However, they are noticeably slower.

The Destroyer upgrades from the

The Destroyer can upgrade to the following: 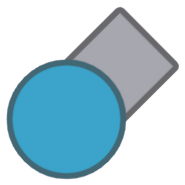 A high-res picture of the Destroyer.
Community content is available under CC-BY-SA unless otherwise noted.
Advertisement