Director Drone (x6)
The Director is a Tier 2 Tank upgrading from the Basic at level 15. The main focus of its branch is drones instead of bullets.

The Director has a circular body with a single trapezoidal drone spawner at its front instead of a barrel.

Drone Stats
(compared with the Basic)

x1.1
The Director is a drone tank, meaning it controls drones instead of shooting bullets.

Holding the fire button (or enabling autofire) will make your drones follow your mouse cursor. While not otherwise in action, drones circle their owner until an enemy or shapes come close enough to trigger the automatic defense that drones provide.

It can control a maximum of 6 drones and has a slightly larger FoV than the Basic.

The Director's gun stats mean very different things than the Basic's. Drones have different base stats and mechanics from bullets. For example, the range stat is misleading as drones do not die after a certain amount of time. Nonetheless, the stats are provided here for reference.

The Director upgrades from the

The Director can upgrade to the following: 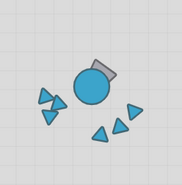 A screenshot of the Director idling in-game. 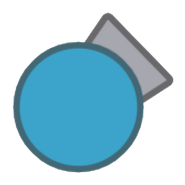 A high-res picture of the Director.
日本語
Community content is available under CC-BY-SA unless otherwise noted.
Advertisement