The Double is a Tier 3 Tank that upgrades from the Twin and the Single at level 30.

The Double has a circular body and two guns supported by a large base.

The Double essentially combines the stat modifiers of the Twin and the Single.

Bullet Stats
(compared with the Twin)

This is nearly the same modifier the Single applies to the Basic, but with slightly lower bullet stats.

Bullet Stats
(compared with the Single)

This is nearly the same modifier the Twin applies to the Basic, but with slightly lower bullet stats.

The two guns of the Double give it a higher rate of fire and overall good penetration. Its bullets are relatively strong. Like the Single, the Double has the ability to extend the camera in the direction it's facing by holding secondary fire. The camera will stay in the position until secondary fire is released.

The Double upgrades from the

The Double can upgrade to the following. 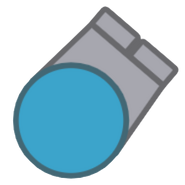 A high-res picture of the Double.
Community content is available under CC-BY-SA unless otherwise noted.
Advertisement