The Elite Battleship is a boss that was included with the release of the game. For some reason it's stuck on the TESTBED bosses branch, despite it being a fairly balanced out boss.

Elite Battleship has a pink triangular base with nine swarm drone launchers on sides and three auto-turrets in each corner of its base.

Elite Battleship has a low speed, normal health, and always spins. Its auto-turrets have a medium bullet speed but surprisingly high penetration and damage. Its swarm drones have speed and initial speed, decent damage, and penetration.

Currently does not spawn. Only spawn at arras.io.

Elite Battleship has strong offensive capabilities, as its swarm drones can easily overwhelm a player and its bullets protect the boss itself. Most tanks will just not be able to kill Elite Battleship before the boss will kill them, so if you see an Elite Battleship it is advised to run. The Boss is surprisingly strong, so only a few tanks may work against it.

Penta Machine is one of the tanks which can kill Elite Battleship in solo. You should usually keep a medium distance, deal low damage, and sometimes charge towards the boss. During such charge, you should come very close, move in a left-right pattern and deal heavy damage to the boss. You will take high damage also, so retreat, regenerate, and repeat until the boss is dead. Incognito is also effective against Elite Battleship, as it will not target you while you deal steady damage.

Attacking Elite Battleship in teams is advised, as it will provide a much-needed diversion. Elite Battleship's will lock on a single player, while another tank will kill the boss. The distracting tank should keep a long range, while only eliminating the swarm drones. The attacking tank should come from the opposite side, ideally a tank with high penetration, and deal high damage to the boss.

Interestingly, this is the one of the two Arras.io boss that is still in Testbed. The other boss is Nest Keeper 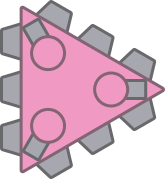