Elite Destroyer is a boss that was added with the release of the game.

Elite Destroyer has a pink triangle base with a Triplet auto-turret on top. On each side of the base, Annihilator cannon is located.

Elite Destroyer's slowly spawns Annihilator bullets, they have high penetration, and damage, but very low speed and range, the reload is the same as an Annihilator.

Its triplet turret shoots fast, high-damaging bullets, with high health but mediocre penetration. It automatically locks on the closest player.

Also, Elite Destroyer constantly spawns weak drones, they have medium damage, but very low speed and health. Up to 20 drones can be spawned.

Elite Destroyer's main ammunition at longer ranges are the triplet bullets, they are fast and somewhat protect it. Bullet spammers, can still however easily overwhelm all bullets, though. Drones are weak and do not cause any problems. Still, do not ignore them if they are close, as they deal good damage. All three annihilator's bullets are spawning at a low rate, and have a pretty limited range. Boss does not have a lot of health, so bullet spammers can finish it off quickly.

Never fight Elite Destroyer at close ranges, drones may be spawned right on you, just as the annihilator bullet will kill you in one hit. The best range is the medium range, as on the longer ranges triplet turret gains some spread and may become more dangerous. 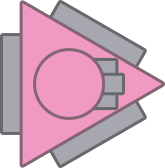 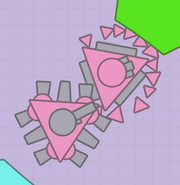