Elite Machine has a relatively fast speed with medium health. Its machine gun turrets are weak, but their penetration protects the boss and deals some damage to the players. Destroyer auto turret has high damage, health, penetration, and medium speed, and can protect the boss from incoming fire.

Elite Machine is not a very strong boss, but still, it should not be underestimated. It can kill an unaware player pretty fast and has excellent defensive capabilities, so you will need some strategy to kill it. Bullet spammers will unlikely work because its destroyer turret will block all focused fire, and the machine gun bullets will block most of the other bullets.

While bullet spammers are not very effective, the Engineer branch, minion and drone tanks can easily kill the boss. As an Engineer branch, you should shoot your pillboxes to the vulnerable sides of the boss, while shooting some pillboxes between you and the boss. As a minion tank, your task is simple - surround the boss with minions, and dodge its bullets. This will work because of the medium health this boss has. As a drone tank, it is more tricky. You will have to hide behind obstacles and launch your drones into Elite Machine. Due to the medium health of the boss, it will die before it will get to you. 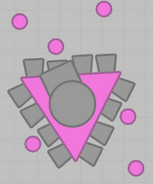 Elite Machine locked on someone, with diep color theme, hence the color difference 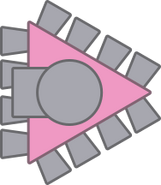 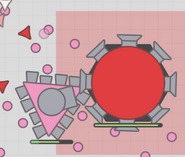